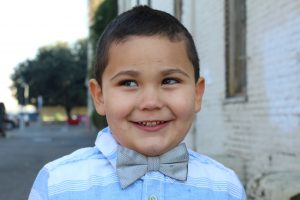 Marco was eight months old when he entered the child welfare system. He was removed from his parents after several hospital stays resulting from severe head traumas. When he was placed with his caregivers, he was suffering from PTSD, night terrors, hallucinations, and general fear and anxiety. Marco was developmentally and emotionally delayed as a result of abuse and neglect. Marco lived with his caregivers, Valerie and Tom, for one year until he was reunified with his mother. Marco was removed from his mother a second time and returned to Valerie and Tom’s home. Valerie and Tom were concerned about Marco’s emotional health and his visits with his father, who had been convicted of felony child abuse. The visits were traumatic for Marco, and Valerie and Tom did not know what to do.

After attending an Advokids training for caregivers, Valerie and Tom learned that they could attend court hearings and file a Caregiver Information Form to help the judge understand all of the trauma that Marco had suffered and the indicators of stress he was exhibiting after visits. They also learned that they could reach out directly to Marco’s attorney. Advokids taught them how to be persistent advocates for Marco and to ensure his safe and secure future!

Valerie proclaims: “As the adoptive mother of this magnificent little boy who had to go through hell and back, I can say with my whole heart that Advokids actively, practically, and without exception, worked to keep our son safe and healthy– consistently over many years. When there was no hope, Advokids was there.”