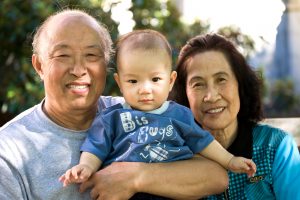 Robert and Sarah called Advokids’ Hotline for help after 9 agonizing months of waiting to have their 3 year old grandson Kai placed in their care. They had been an important part of Kai’s life since his birth, and when he was abruptly removed from his mother’s care and placed in foster care, they rushed to claim him. They were stymied by the county child welfare agency’s continued delays in placing Kai with them, and were allowed limited visitation with Kai. Advokids’ legal and social work staff helped Robert and Sarah intervene and access the juvenile court to let the judge know that Kai was suffering from his separation from his grandparents whom he loved and trusted.

The judge ordered more frequent visitations between Kai and his grandparents, which quickly grew to overnight visits. Soon after overnight visits began, Kai’s foster parents, grandparents, and county social worker coordinated efforts to “transition” Kai to the home of his grandparents. Advokids continued to support Robert and Sarah until a permanent guardianship was established to secure Kai’s future in their care.