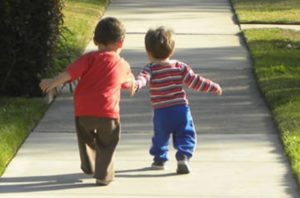 Advokids helped Michael and his brothers find security and a permant home.  Six month old Alexander and twenty month old Michael were placed in Ceci’s home by their mother who was struggling with drug addiction and also struggling to raise her two older boys. The two older boys were later removed from their mother and placed in foster care with an uncle and his eight children. Despite reports of abuse and neglect suffered by the older brothers in their uncle’s care, Michael was removed from Ceci, his stable and caring “mother” figure for over one year and placed with his older brothers in the care of his uncle.

Ceci called the Advokids’ hotline for help. Advokids counseled Ceci and taught her how to be the “voice of the children” and to petition the court on behalf of all of the boys. Advokids supported Ceci throughout the painful five month period when Michael was not in her care. She kept close contact with the brothers placed with uncle and tirelessly advocated for them. The uncle was ultimately charged with child abuse and now all four brothers are thriving in a safe and loving adoptive home with Ceci.