The Adverse Childhood Experience Study (ACES) is the largest and first research study that established a direct association between childhood trauma and adult ill health. The study found that the greater the number adverse childhood experiences the greater the possibility of disabilities and dysfunction in adult life.

ACES began in a Kaiser Permanente’s Health Appraisal Clinic in 1995 and has a fascinating history. For more information go here. ACES is an ongoing study that is now a collaboration between Kaiser Permanent and the Centers for Disease Control and Prevention.

The Connection between Childhood Trauma and Adult Ill Health 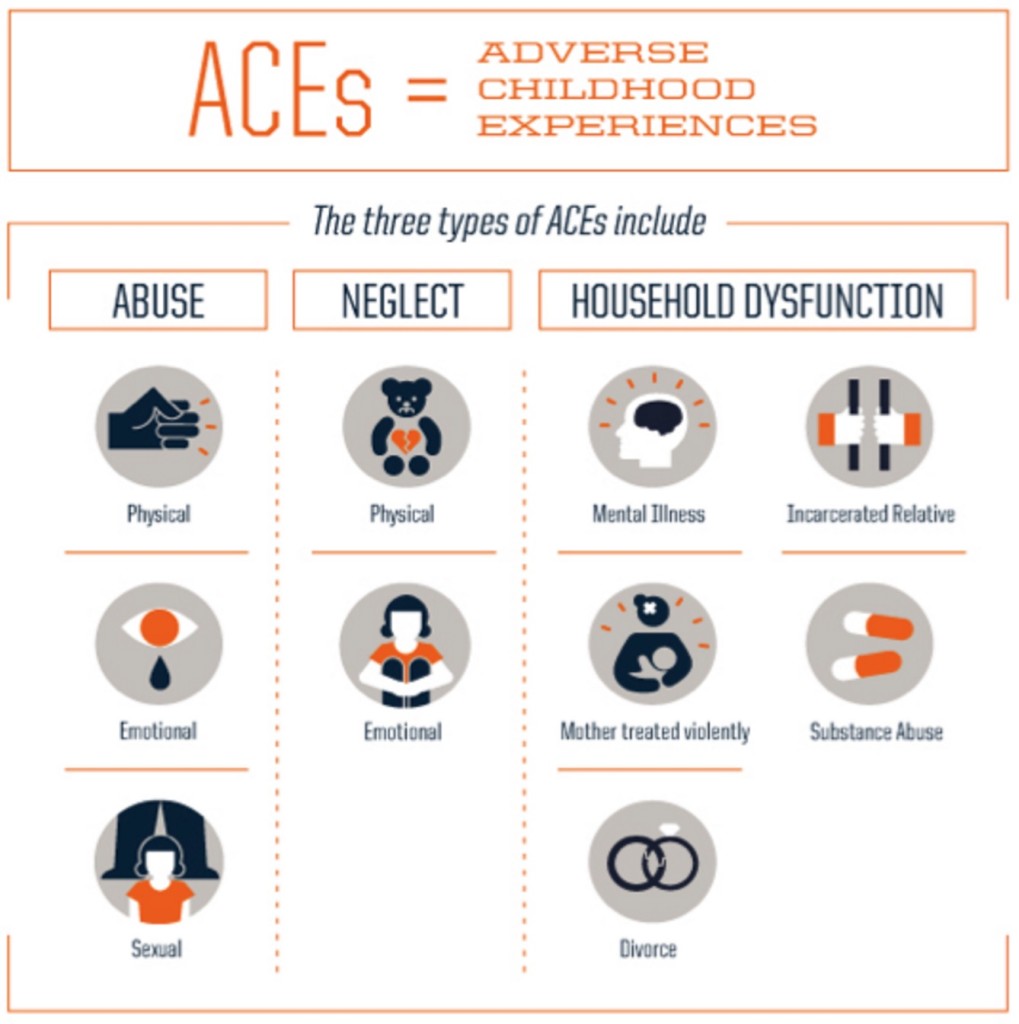 The Connection Between Childhood Trauma And Adult Health

Center on the Developing Child

The Impact of Resilience on ACES Resources

In the ACES study, all of the adverse experiences were given the same weight. ACES demonstrated a significant association between cumulative adverse experiences in childhood and a host of negative adult outcomes, including physical and mental health problems, substance abuse, risky sexual behaviors, suicide attempts, aggression, cognitive difficulties, and poor work performance. The study takes a whole life perspective and has uncovered and confirmed that adverse childhood experiences strongly impact growth and developmental issues and the prevalence over time of risk factors for disease, disability, social and emotional problems and early death. If children experience four or more adverse experiences, the odds of having negative health outcomes rise to 12 times that of children without such experiences.

Center on the Developing Child 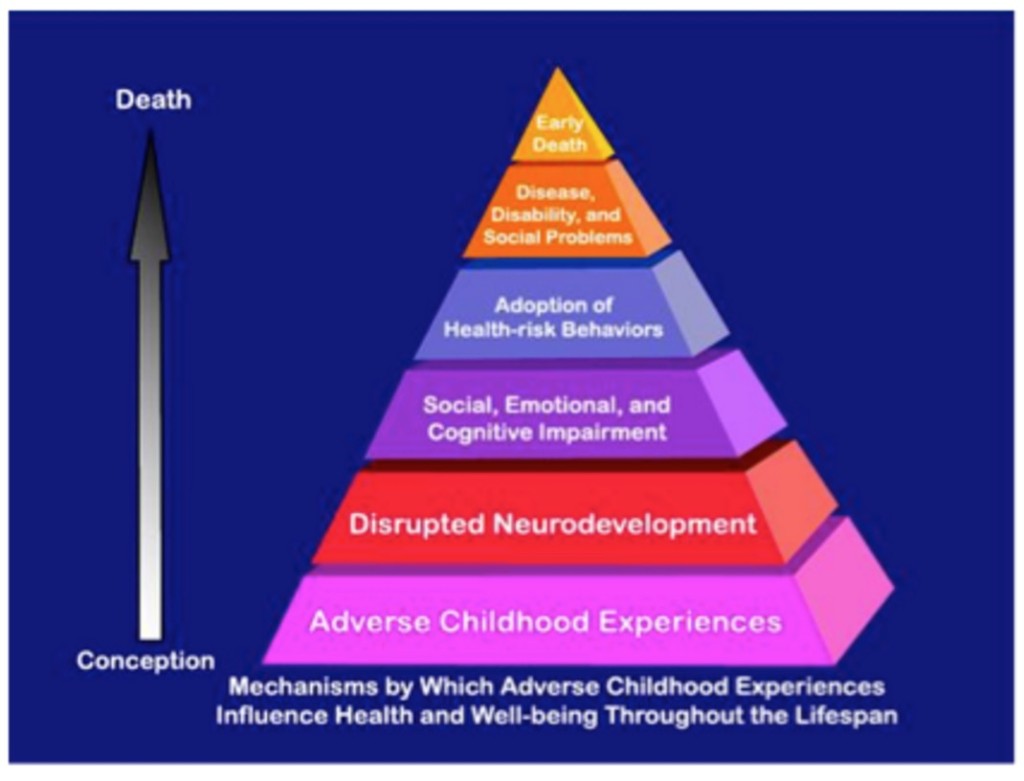 Children with ACEs are more likely to have: 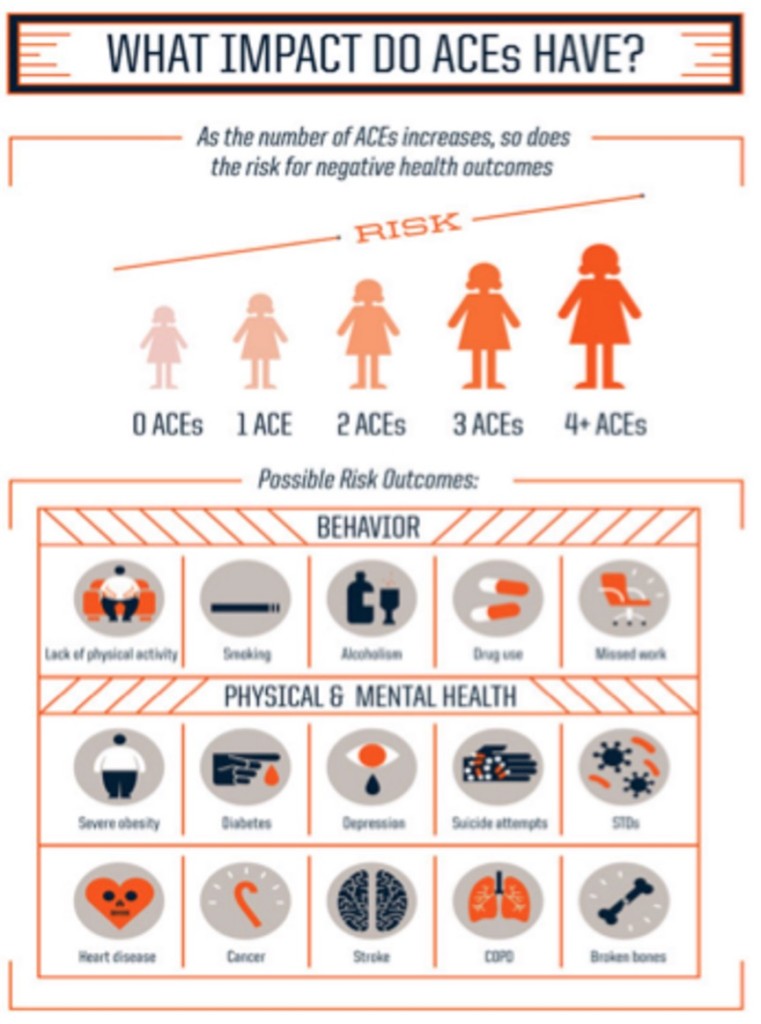 Nadine Burke-Harris is a pediatrician and the founder and CEO of the Center for Youth Wellness, an initiative at the California Pacific Medical Center Bayview Child Health Center that seeks to create a clinical model that recognizes and effectively treats toxic stress in children. In her TED talk, linked below, she explains the importance of understanding ACES.

“We now understand better than we ever have before how exposure to early adversity affects the developing brains and bodies of children. It affects areas like the nucleus accumbens, the pleasure and reward center of the brain that is implicated in substance dependence. It inhibits the prefrontal cortex, which is necessary for impulse control and executive function, a critical area for learning. And on MRI scans, we see measurable differences in the amygdala, the brain's fear response center.

In the words of Dr. Robert Block, the former President of the American Academy of Pediatrics, ‘Adverse childhood experiences are the single greatest unaddressed public health threat facing our nation today.’ This is treatable. This is beatable. The single most important thing that we need today is the courage to look this problem in the face and say, this is real and this is all of us. I believe that we are the movement.”

The original ACES study focused on adults. Researchers have been interested in learning more about childhood adverse experiences among children who have been reported to the child welfare system. This comparison provides perspective on the future challenges foster children may face, as well as preventive services and treatment services.

In order to apply ACES to foster children, researchers at the Administration for Children and Families used NSCAW II, a national longitudinal study of the well-being of 5,873 children who had contact with the CWS within a 14-month period starting in February 2008. The researchers found that more than half of all children reported to CPS had experienced four or more adverse childhood experiences BEFORE they even came into contact with CPS. “The levels of adverse events foster children are experiencing are extremely high. As a point of comparison, almost two thirds of the adult population of the ACES reported one or no adverse childhood experiences. Even the youngest children in the NSCAW population have already accrued more adverse childhood experiences than many of the adults interviewed for the ACES.”

Administration for Children and Families

No. 20: Adverse Childhood Experiences in NSCAW

III. The Impact of Resilience on ACES Resources

ACEs and adversity is only one part of the equation. Children have their own characteristics and experiences that help them develop resilience despite exposure to ACEs. Children are not born magically resilient nor susceptible to ACEs. Resilience can come from a person’s own biological and developmental characteristics as well as nurturing relationships, family, community, and systems that mitigate the negative impacts of ACEs. Researchers studying resilience continue to explore the processes involved in developing and supporting resilience. However, all agree that close relationships with competent caregivers or other caring adults are vital in building and promoting resilience in children.

For more information on resilience and the effect is has on ACEs, see the Children’s Resilience Initiative™ (CRI)  an organization working to increase the positive, resilience-building experiences in the lives of the children, parents and families in our community. 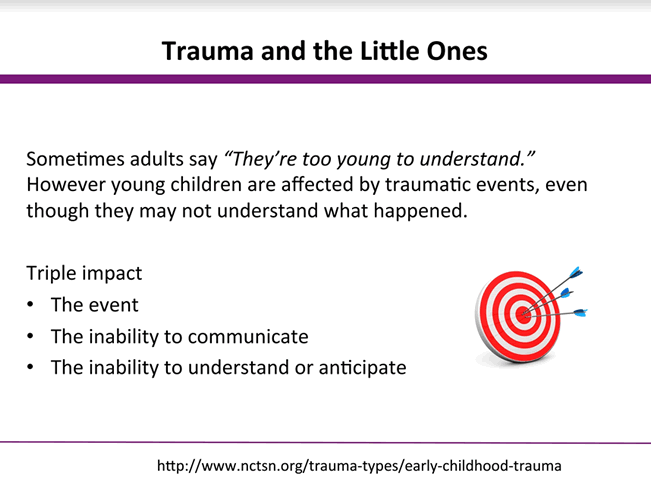 Advokids would like to acknowledge and thank Catherine Deridder MD, Jessica Richards MS, MSW, LCSW, and the UC Davis Center For Human Services for allowing us to share "Bridging Law and Trauma-Informed Care" with you. We collaborated with Catherine and Jessica in 2015 and asked them to create a training specifically for attorneys who represent children in foster care to enhance practitioner's awareness and encourage trauma-informed representation. We are so proud of their webinar!